Finally got a chromebook. I was interested in the HP Chromebook 13 since it was first announced as a kind of cheaper Pixel. But then it spent several months on HP’s out of stock list. Now it’s back.

There’s several models available, starting at $499 for a Pentium. I moved up to the $599 (for $580 actually) model which comes with an m3. This includes 4GB of RAM. After that, there’s m5 and m7 models with more RAM, but the price goes up dramatically, and none of them include more storage. Always 32GB. All come with the same 3200x1800 display, which is what really attracted me. This should be nice and crisp, but as we’ll see, it’s not perfect.

It’s well put together. Feels solid in the hand. Comparable to the UX305 in many ways, but it feels lighter. Almost like the base is hollow. The included USB-C charger requires a three prong plug. (Why is Lenovo the only PC company to realize how sweet two prong plugs are?). At least the charger cords are a decent length. Six feet to the outlet, then another six feet to the USB-C plug. The case has a brushed metal finish, but attracts some very visible fingerprints and smudges that make it look dirty after light handling. The palm rest doesn’t seem to have the same problem, though. It has the same squared edges as its big brother Pixel, even including a stripe on the back, but the stripe here is plain gray and doesn’t light up. Overall, a nice looking machine in good company with the Macbook Air and Zenbook, but it’s no Spectre.

There’s two USB-C ports and one USB-3 port, which seems like a reasonable mix of optimism and back compat. The USB-C ports also double as power and video ports, however, so when docked and plugged into a monitor, ports start disappearing quickly. My UX305, for instance, also has 3 USB ports (all the older A design), but none of them are used up by power or HDMI, which get dedicated ports. Despite the solid feel of the construction, one quirk. The motherboard is mounted at a very slight offset from the holes drilled into the machine side, making the USB-3 port a very snug fit.

The keyboard could use a bit more key travel, but I’m managing to type this review decently enough. There’s a certain soft squish to it sometimes that causes missed keystrokes. For me, this mostly manifests as ctrl-clicks turning into clicks, resulting in the new tab opening instead in the current tab. The keyboard layout is of course the chromebook layout, which is what it is. There’s a backlight which turns itself on and off in response to unknown and unpredictable inputs, potentially several times per minute. Hysterical lack of hysteresis. The touchpad is quite good, with a very nice texture to it, but the lack of tap and drag gets old fast. (Wow. There’s a setting to change this, but it’s hiding under accessibility, not touchpad settings.)

Now, the display. 3200x1800 mega QHD or whatever. Sounds impressive. Alas, it has a very strange pixel grid. By default, the display is set it 1600x900 and it does look pretty good, but be wary of trying to do things at the native resolution. There’s a very strong ringing effect. I don’t have a photo lab here, just an iPhone, but I think the pictures below illustrate the problem. 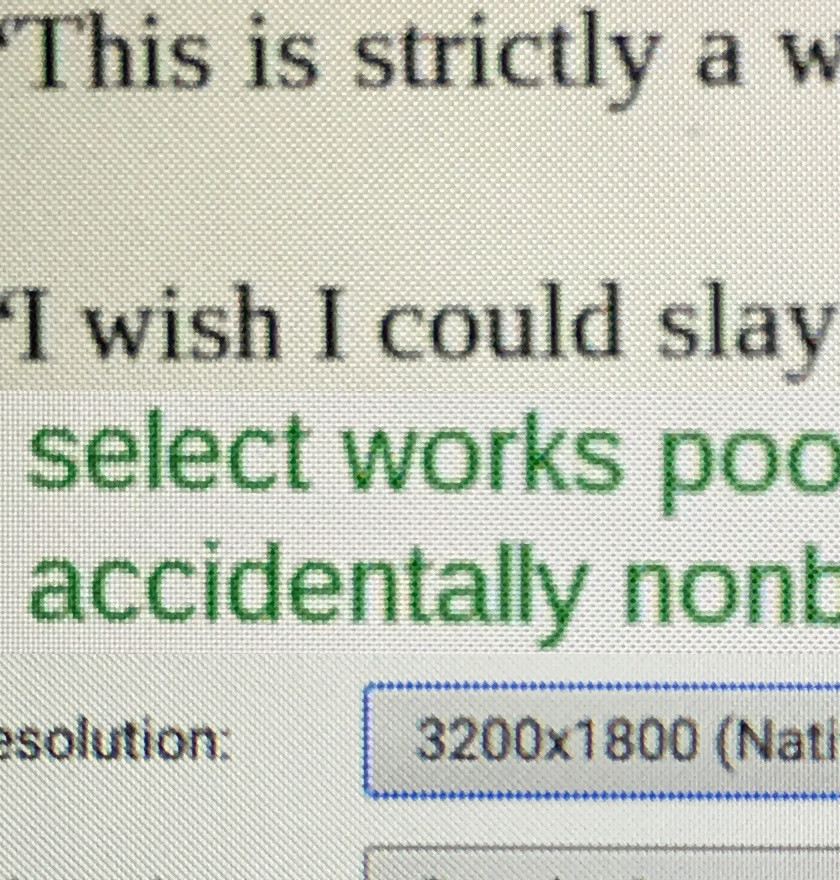 Look how the blue outline around the resolution isn’t even a line. It’s a series of dots. The effect is even more pronounced in person. All the vertical lines in letters such as ‘l’ and ‘d’ have serrated edges.

When viewed at the scaled resolution, things look better. Essentially, anything drawn using only a single pixel looks terrible, and it’s only by combining and smoothing multiple pixels that an appearance of crispness is achieved. Depending on font size, color, background, etc. the serrated effect comes back at times. 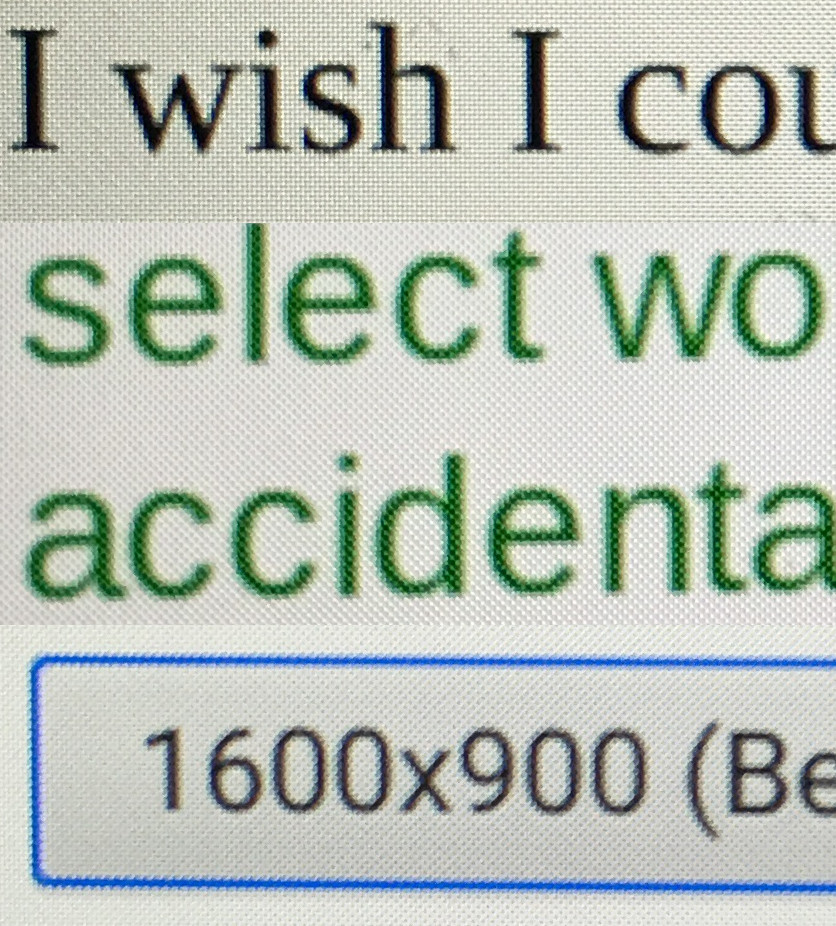 For comparison, here’s the X1, a slightly lower resolution screen, but with a square pixel grid. 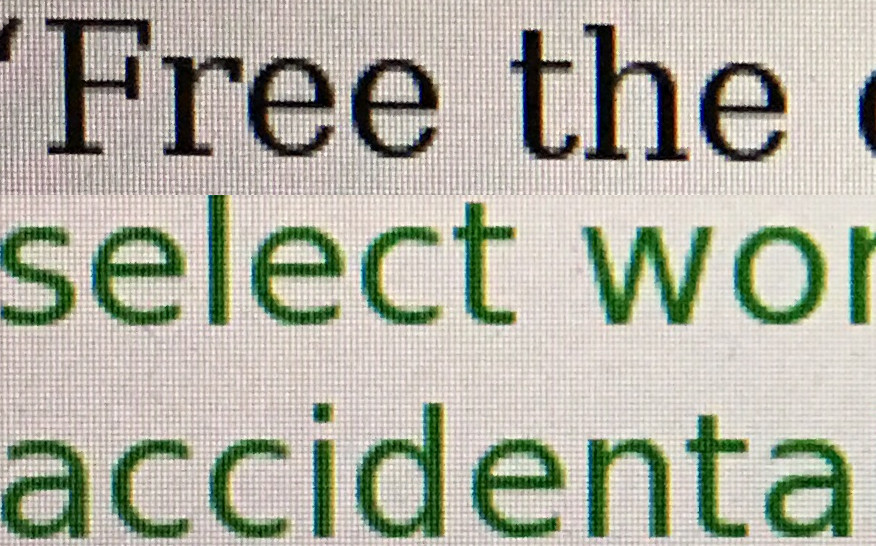 I’ve read several reviews of the Chromebook 13, and all of them fawned over the screen. None of them mentioned the peculiarly poor display when used at its actual native resolution. Perhaps that’s not a typical user experience, I don’t know, but the very first thing I tried after turning it on and setting it up was to flip the resolution. So many pixels, so much data. This is going to be awesome! And... it’s not. But it’s not all bad news, using chrome’s zoom feature to zoom out on web pages works a lot better and still allows a lot of content to be displayed on screen. Not sure I can explain the difference in results.

The screen is glossy and fairly reflective. White on black websites are difficult to read due to the distraction of staring at my own face. X1 and UX305 are much better in identical settings. This can be alleviated by cranking the brightness up at the cost of some battery life. I added an antiglare screen protector for a few dollars. It’s a huge improvement, minus a pesky air bubble or two. But that’s easier to live with than full screen reflections.

It’s certainly fast and responsive. I don’t mean to write a full review of ChromeOS, but there’s a lot to be said for an operating system designed to do one thing and get out of the way. No distracting notifications that this or that module needs an update. (My OpenBSD desktop setup isn’t really much different in that regard, but lacks a certain amount of polish. Chrome is clearly competing against Windows here, and differentiates itself well.)

HP claims something like 10 hours (no, wait, make that 11.5 hours!) battery. Maybe with a lot of luck. Seven might be more reasonable. I also found the remaining time estimator to be buggy. Over the course of two hours it consistently said I had about six hours remaining, despite the percentage steadily ticking down about 30%. Soon I imagine I’ll be at 10% and still six hours.

Final thoughts are mixed. I can’t really imagine using one of the cheaper $200 models with their terrible screens and clunky designs, but at this price, it’s a good chunk of change for a browser only machine.

After a few weeks of use, it’s pretty convenient as a second machine. I could never live with just a chromebook, but if I want to spend an afternoon out at a cafe doing some online reading, it’s a good machine for that purpose. I don’t have to disconnect my main computer. In that sense, it replaces the iPad I used to carry around.

I don’t think there’s any reason to install OpenBSD on this machine. Of course, this doesn’t prevent some enterprising developers from working on support, but personally I’d recommend the Zenbook line. The limiting factor is likely to be storage. 32GB is more than enough for OpenBSD plus extras, but I’d have to ditch my precious Rick And Morty collection.