The Samsung ATIV Book 9 (note: no Plus) is a slightly older laptop from 2015, but I happened to find one on the cheap. In essence, it is the PC version of the 12 inch retina macbook. I thought it would make a good alternative travel laptop, but the usual selling price is a bit steep unless you find a good bargain. I did, so here I am and here it is.

Physically, it’s in the ultraportable category with a 12 inch screen and weighing about two pounds. It’s a completely fanless design, using an M-5Y31 CPU (Broadwell generation). My model came with 8GB RAM and 256GB SSD, but it’s possible to find some with half that. Everything is a bit tiny and compromised, so in my opinion it wouldn’t make for a good all around machine (like the Carbon X1), but if space and weight is at a premium, it’s a good substitute.

I immediately installed OpenBSD 6.6 when it arrived and have been using it for a few days. I have a few complaints, and I’m not confident in recommending it, but no regrets.

Overall build construction is very solid. It’s well balanced, too, and easy to hold in the hand. The lid can be opened with a single finger if it’s resting on a table, but the lid doesn’t flop around otherwise. It opens to about 150 degrees, which isn’t quite flat, but decently flexible.

The screen is a high resolution 2560x1600. That’s the now extinct 16:10 ratio for those keeping track. inteldrm works fine. It’s glossy, but very bright. (Samsung claims up to 700 nits in some outdoor mode? I generally keep it pretty dim, even xbacklight =10 is quite bright on this laptop.) Unfortunately, despite the resolution, it has a diagonal pixel grid, which I find very disagreeable. Pictures of a similar grid on the HP Chromebook 13. It’s less noticeable with black and white text, but for instance red text on a black background has a noticeably stippled appearance. Enlarging the font size masks the effect, but don’t expect to have lots of legible tiny text. Still, I’ll take it over a 1080p (or worse) screen.

The keyboard is a pretty shallow softish chiclet style. Not awful, but clearly not a Thinkpad. Some keys are extremely narrow. The tick and backslash are less than half normal sized? The main keys are decently sized and spaced, however, so I don’t have much trouble typing on it. The keyboard is not backlit, which is a bit of an omission for a premium device.

The trackpad is supported by imt. (Incidentally, this is the same laptop that jcs started writing all these iic ihidev drivers for, of course there’s been some improvements and rearrangements in the mean time.) I miss some of the customizations I make to the synaptics driver using synclient, but it works pretty well. Scroll and one/two/three finger tapping as well.

There’s one USB A port on either side. At the time, this was probably an advantage compared to the Macbook’s USB C, but now that I have USB C travel chargers for everything else, I’m stuck with a proprietary plug for traveling with this laptop.

The wifi appears to be some flavor of ath10k which is not supported. It is soldered on, see below, which prevents replacement. Free drivers do exist, however, so this is not a terminal condition. Currently using urtwn instead. 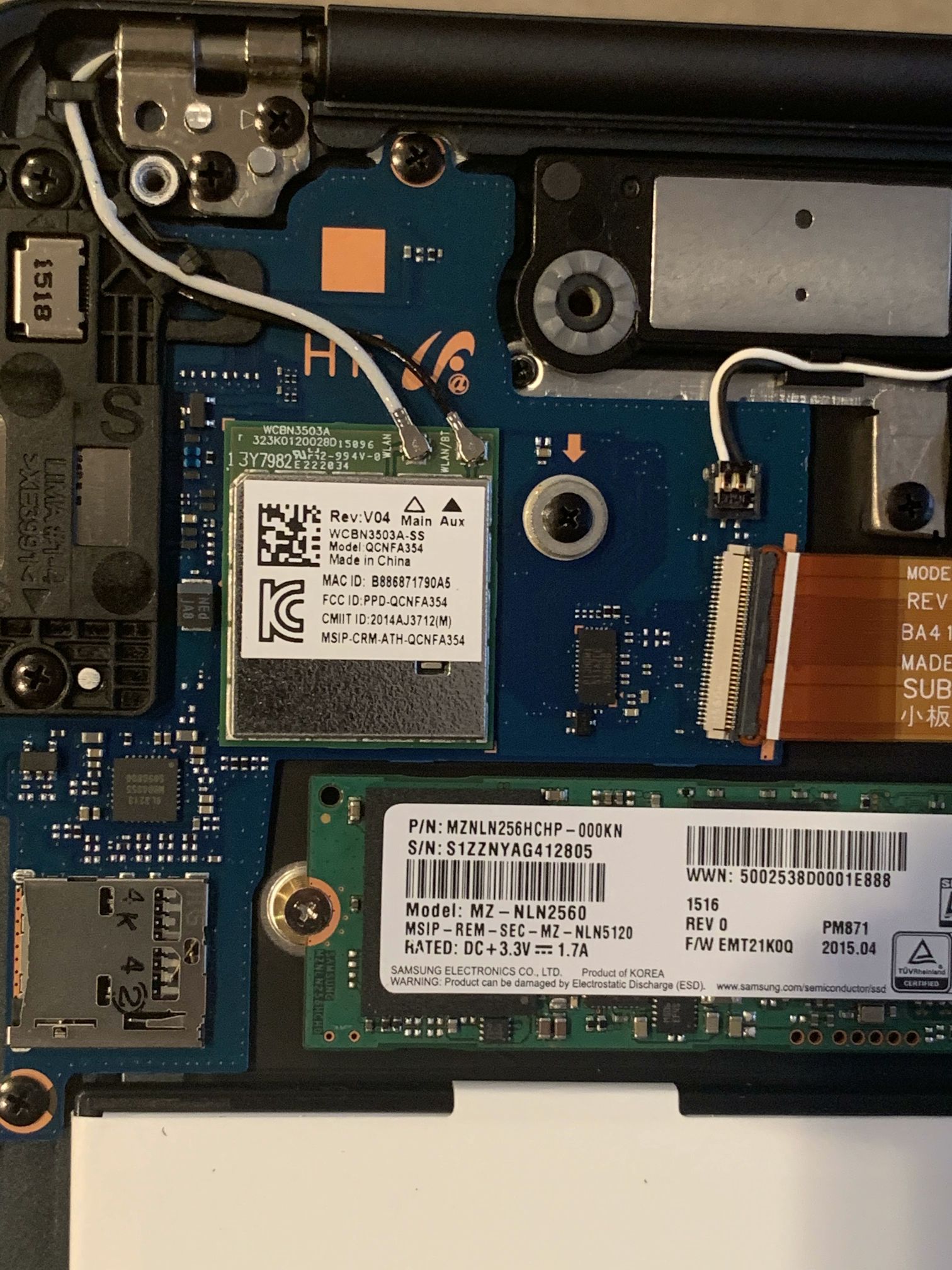 Suspend and resume work with one serious caveat. About two or three seconds after resume the system locks up hard. This is obviously problematic, but probably not unresolvable.

Battery life seems to be about five hours, maybe stretched to six. Not bad for the time, and considering the weight, but a little short of all day fun.

Performance is pretty good. It’s hard to tell the circumstances under which it would be thermally throttled, but I’m guessing that’s going to happen during long builds. And it only clocks so high, even under ideal conditions. But it’s more than adequate for making and testing changes to individual programs on the go. I had a very productive afternoon working on honk (before I installed the USB wifi...). For reference, make build took 283 minutes using two cores, while make doas takes 0.7 seconds. In short, any build which might call for a coffee break will require a larger snack, but anything that’s closer to real time development is probably just fine.

As a portable OpenBSD laptop, all the essential functions are working. (I’ve seen worse.) There are more compromises than required for a well supported Thinkpad, however, so I’d really only consider it if I absolutely needed to cut another pound out of my pack. The nonfunctional suspend may be a dealbreaker, unless one prefers to travel with their auxiliary laptop powered down.

The nearest competitor is probably the same era Zenbook UX305 reviewed here. That machine is a bit heavier, with a chunkier screen and disagreeable hinge, but otherwise very similar (and with working wifi). I’d pick up another one if I could find it at the right price, but like many popular but niche laptops, most used models are selling for almost original prices.